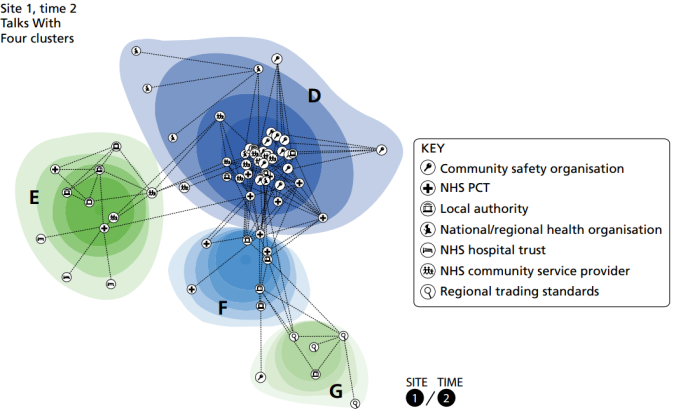 Health and well-being services, in common with many public services, cannot be delivered by a single organisation and require co-ordination across several organisations in a locality. There is some evidence, mostly from other sectors, that middle managers play pivotal roles in this co-ordination by developing networks of relationships with colleagues in other organisations. These networks of relationships, established over time, provide contexts in which managers can, collectively, create the knowledge needed to address the challenges they encounter. Relatively little is known, however, about how these knowledge-creation processes work in a health-care context.

This study focuses on how health and well-being managers collectively create knowledge. Our objectives were to develop a better understanding of the way that knowledge is created within and between health-care organisations, across different managerial levels, and of the role played by informal networks in those processes.

The study was undertaken in health and well-being services in three sites in northern England, employing a case study design. The field methods used were landscape mapping, structured data collection for network analysis and latent position cluster analysis, and semi-structured interviews for narrative analysis. Our network modelling approach used the concepts of latent position network models and latent position cluster models. We used these models to identify clusters of people within networks, and people who acted as bridgers between clusters. We then interviewed middle managers who – on the evidence of our cluster models – occupied similar positions in our graphs. The latter were used to produce practice-based narratives of knowledge creation.

Our narrative results showed that middle managers were synthesisers, in three different senses. First, they draw on different types of information, from a range of sources – quantitative routine data about populations and services, reports on progress against contractual targets, research evidence, and intelligence from colleagues in other localities. Second, they are able to link national policies and local priorities, and reconcile them with local operational realities. They are not always successful, but can integrate the different approaches and working practices of NHS, local authority, private and voluntary organisations. Third, they are able to link ideas, negotiation and action. We found that the network results were most usefully represented as clusters, explaining relationships between actors. Actors within clusters had common attributes, and as a result we were able to interpret the broad purpose of each of the clusters in the graphs for each site. The most useful number of clusters was three or four for both network types, and for both sampling periods, at each of the three sites. The clusters at all three sites had a mix of organisations represented within them. There was a mix of seniorities of managers in all clusters. Relationships were simultaneously formal and informal: formal contracts were managed in a context of ongoing conversations and negotiations. Relationships were simultaneously stable and fluid, with stable ‘cores’ of managers but memberships that varied substantially between two periods of data collection.

Our theory about knowledge creation was broadly supported. Managers of health and well-being services develop and maintain knowledge collectively. Their collective efforts are typically manifested either in projects requiring multiorganisational inputs or in taking ideas from genesis to the delivery of a new service. The cluster modelling suggests that networks of managers are able to maintain relationships, and hence conserve technical and prudential knowledge, over months and years. Priorities for future work include establishing the value of latent cluster modelling in understanding the work of groups and teams in other health and social care settings, and studying knowledge creation in the context of the interorganisational co-ordination of services.