The following maps and figures show the dominant themes and associated concepts for the Labour Party and Conservative Party Manifesto’s for 2010. [Lib Dem to be added soon]. 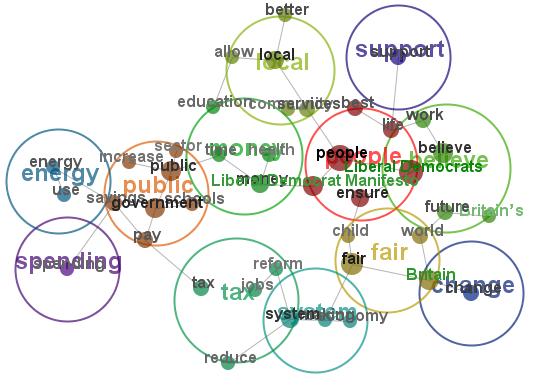 Using Leximancer, the maps of the themes cluster via concept co-occurrence information so that concepts that sit next to each other have connections between them. To begin I processed all texts from start to finish of the Leximancer analysis in the default settings mode to create initial exploratory maps In the settings phase the Automatic Concept Detection is on.

All maps generated were set to the following parameters; concept size 100%, theme size 30% (default setting) and degree of rotation 0%. The colours of the circles, themes and concepts are ‘heat mapped’, so the concepts that have the greater level of co-occurrence are closer to the red end of the spectrum. The brightness of a concept correlates with its frequency and so the brighter the concept the more often it appears in the text. The brightness of the links that run between concepts relates to how often the two connected concepts co-occur within the text. The proximity of two concepts indicates how often or not they appear in similar conceptual contexts. The themes are the coloured circles around clusters of concepts. The lines or pathways navigate the most likely path in conceptual space between concepts in order to aid reading the map. The connectivity score reflects the degree, (equivalent to degree score in network analysis) to which the theme is connected to the other concepts in the map (Leximancer Manual, 2009).